This year a friend invited me to the Run the Edge 2021 mile challenge. We set up a team of four people and I initially set a goal of 1,000 miles for myself. I’m not getting out much (who is?) but I do have a treadmill and a shiny new Peloton bike that arrived just before Christmas. Yes, now I’m one of those people. 😉 Don’t look for me to be on a TV commercial any time soon, though.

My step-count goal is 7,000, but it takes me to about 7300 steps to reach 3 miles a day, which would have given me the 1,000 miles for the year. Then I decided to start including my bike miles, since it is all cardio and that’s what I’m really tracking with the step count. The 2021 miles is an average of 5.54 miles a day so I was doing little over half of that with just the walking.

Today I earned my 300 mile bib and I’m on track for the Hollywood Streaker challenge, too, so I can open my medal at the end of the month. Run on, writers! Just don’t use those run-on sentences. 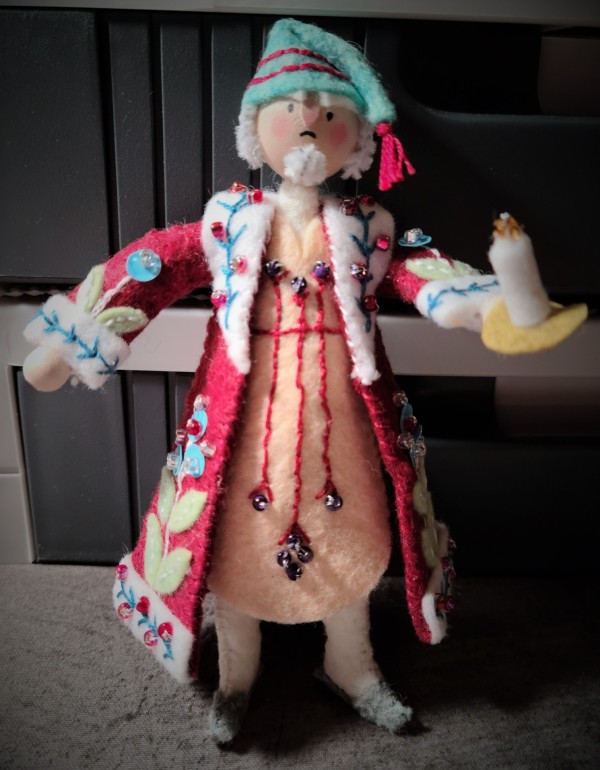 Scrooge is not happy with this year. Who can blame him?

I occasionally delve into crafts such as crochet and knitting, and I’ve been considering embroidery even though I get tangled up and stab myself repeatedly with the needle. I spotted some wonderful felt patterns on Etsy and bought the Mr. Scrooge ornament pattern from the mmmcrafts shop. Which of course led to more shopping, since the felt I already had on hand wasn’t in the colors I wanted (even though I didn’t know what I wanted), and I needed chenille stems and embroidery floss, etc.

Sigh. Crafting and arts are like that. You know they say there are never enough art supplies, right? Yeah, you should see how many gel pens I have. I used to have a Sharpie collection, but I’m moving toward Copic markers and brush pens with ink that doesn’t bleed through my Rhodia journal.

A bout of crafting this fall has given me a scarf, a neck warmer, a pair of fingerless mitts, and now Mr. Scrooge. I’ve been involved in some difficult and long editing projects this year, so I’m ready for a holiday break. Here’s wishing you a healthy holiday season. 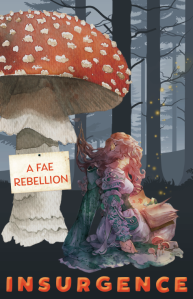 It’s been a long spring and summer, but my logjam of writing projects is slowly becoming unstuck and I’m making progress once more. This summer I published the first two editions of Writer’s Catalyst and now my short story “Carrier Waves” has been published in Corrugated Sky’s Insurgence: A Fae Rebellion.

The plot is medieval, involving a group of fairies who fled the Earth a few hundred years ago and are now looking to return — using the quickest transportation that they can find. But when I started writing this story it was pure science fiction, and as I wrote the first few paragraphs it quickly became clear to me that I had somehow channeled the 1950s or 1960s for the setting.

Writers will tell you that stories make demands on them. Well, it’s true. You start writing and the next thing you know the story has a life of its own and the characters will not always be predictable, let alone the plot. In fact, trying to make the characters behave in the way that your plot demands usually means that the characters have the last say and the plot tends to go out the window. But that’s what rewriting is for, right? 😉

On the nonfiction front, I’m working on a textbook project and I have articles on nineteenth century electricity and electromagnetism to get drafted. That’s one reason I opted not to do NaNo this year; I’m just “booked” with nonfiction that requires research, which means the writing process tends to be much slower than the 1667 words a day that NaNo requires. I’m setting 300-word daily goals and aiming for working on the nonfiction four days a week minimum.

However, I have two drafts from previous years that I might dust off soon and get back to. But not before I finish the electricity article and ponder writing up a journal article or two. 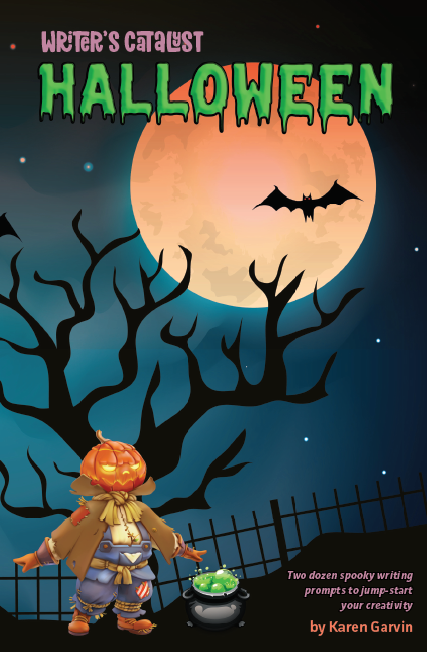 Ugh, this year has been one long ghastly experience. But to take your mind off of the real-life horror show, why not engage in some fun writing for Halloween?

I’ve just released Writer’s Catalyst: Halloween, which is available at Amazon and Barnes and Noble. The book series contains two dozen writing prompts and is formatted as a journal with lined pages for you to use for your own writing. I’ll be releasing new themed volumes on an occasional basis, maybe two or three a year (at least, that’s what I’m planning for now).

For today’s Thursday Writing Prompt, here’s an original Halloween theme: Shelly “Skulls” Skeleton has challenged Mumsford “Mummy” Morrison to scare the wits out of a group of college kids. Neither Shelly nor Mumsford are allowed to use human technology, whether it’s flashlights or the internet or cellphones. Instead, they must rely on traditional Halloween magic. Your task is to pick either Shelly or Mumsford as your protagonist and write up their frightfest plan.

To make the task a bit more daunting, you must have a committee of impartial judges to decide the winner of the contenst. Think about how the committee comes to its conclusion — is it a point scoring system? And just how “scared” is “scared”? Does making a group of kids scream count for very much? Or must Shelly and Mumsford resort to more diabolical schemes that produce more than just a fright? Make the contest as fun or as devious as you want, but be sure to have fun with the plotting!