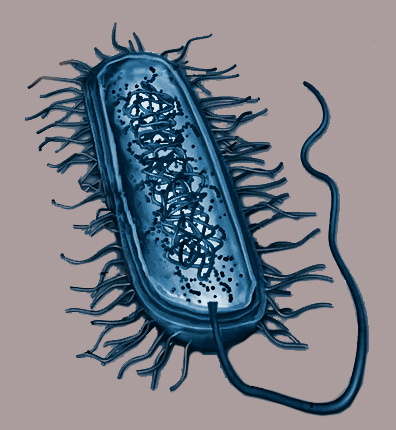 Cutaway view of a shaggy bacterium.

I’m writing a short Steampunk story set in the same world as my Seacombe novel, which I expect to publish this year. The story involves some science, and I went looking for pictures of plant cells so I could describe them in the story as the character sees them. I came across this cutaway image of a bacterium (not a plant, though). I couldn’t find any copyright information on it, so I’ve appropriated it for the blog and done some photo manipulation on it just because I felt the need to do something artsy this morning.

So, this bacterium looks pretty shaggy, doesn’t it? It makes me think of a cheese puff that’s fallen onto a carpet and rolled around for a few days, picking up crumbs and stray hairs. Not that I have stray cheese puffs roaming about my house, mind you! Potato chip crumbs might be another matter …

This week’s Thursday Writing Prompt celebrates bacteria. They’re not all bad, and despite the bad rap that Escherichia coli has earned (a rod-shaped bacterium that looks suspiciously like our shaggy friend above), it’s only one variety of E. coli that is dangerous. Many species of bacteria are beneficial, and we wouldn’t have yogurt without them.

In honor of bacteria, for this week’s writing prompt, you have a character who is biologist studying a bacterium that has some very unusual properties. Write a short paragraph describing this microscopic beast and what makes it so special. It doesn’t have to be realistic, but as with any good science fiction you may want to do a little bit of research. Bacteria inhabit some extreme climates, and have even been found living in rocks, so don’t feel that you have to limit the environment that it lives in. Push the boundaries, and come up with something fantastic. Happy writing!