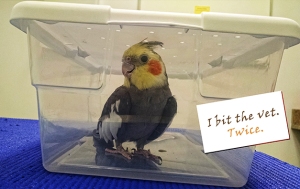 Zim in the box of shame. As you can see, he’s showing no remorse for his deeds.

Last year I took my two cockatiels to the vet after the older bird, Peachfuzz, became listless for a couple of days. One off day isn’t a big deal, and they were molting, which usually means they’re grumpy and sleep a lot, but Peachfuzz is about 21 years old and I didn’t want to ignore something that might be serious. So I packed them up in separate paper shoeboxes and took them to the vet.

Now, Peachfuzz is a real trooper. He put up with having to stand on the scale to be weighed, allowed the vet to listen to his heart (and discovered there were buttons on the vet’s shirt — buttons!), and even toughed it out when it came time to have a blood sample drawn. The only reaction he had was to clench his foot, and having blood drawn is not a small issue for a small bird! But Zim, who is 10 years old, is literally a bird of another feather. He screamed his head off the entire time that the vet was handling him and I’m sure some (I mean, all) of the squawks were the equivalent of four-letter words. Worse, he bit the vet. Twice.

So this year when I took them for a yearly physical I hoped it would go easier. Nope. Peachfuzz just hung out and smiled at the vet’s assistant (yes, animals do smile), but Zim wouldn’t even allow himself to be weighed. This horrible activity consisted of having to stand on a plastic perch attached to a support, which was then put on a scale. Really, it was a bird toy, but Zim flew around the exam room in terror of the multi-colored plastic monstrosity until he was exhausted and landed on the floor, where he promptly tried to hide under a chair. I scooped him off the floor, and that’s when the assistant pulled out the plastic bin. Yep, the plastic box of shame. In you go, Zim!

Of course, he bit the vet again (twice), but the squawking was a bit less than last year’s fiasco. This year I boarded the birds at the vet’s while we went to the Maine Astronomy Retreat and they reported that both birds were well behaved, and had enjoyed whistling with the vet. My husband had worried there would be a Band-Aid surcharge on top of the board fees, but happily everyone survived the ordeal with minimal distress. There’s real hope for next year’s exam!