This weekend I’m going to head out to the Maryland Sheep and Wool Festival. I’ve crocheted since I was a child, although I didn’t do much in the way of handicrafts for many years. In the past few years I’ve developed an interest in kumihimo braiding, and last year I bought a 10″ rigid heddle loom and made exactly one scarf. I’ve also dabbled a bit with hand spinning, but I think I’ve only made about a foot of yarn so far. However, in the interest of trying different fibers, I have a cotton seedling on my windowsill. I hope to harvest enough cotton to spin enough thread to make a potholder or mug rug. That’s probably ambitious, though.

Thinking about the sheep and wool festival made me think of some really silly animal puns, ewe know? So that’s this week’s Thursday Writing Prompt. Your task is to come up with sentences that incorporate animal names in place of common English words. These exercises have no point except to loosen your writerly inhibitions and have some fun with language, but they may end up sparking an idea for a story. Aim for a dozen silly sentences and don’t worry if they don’t make much sense. Enjoy! 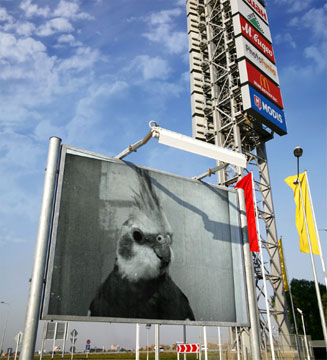 I used PhotoFunia to put Zim on a billboard poster.

I’m trying to break through the pack ice of my creativity and see if I can break loose a few ideas. The problem with getting caught up with the idea of trying to sell your creative work, whether it’s writing or photography, is that you start to think in terms of whether or not you can sell a piece. I’m trying to back far enough away from that mindset so that I can take some throw-away pictures and see if I can come up with something fun. I’m trying not to think of it as a waste of time, because it really isn’t.

Having a smartphone with a camera has given me a “toy” to play with, as far as photography is concerned. Since I’m not carrying around my big camera I don’t feel like I have to produce a really good photo. It’s no big deal if the photo doesn’t turn out well because there’s no danger of it being “wrong.” So I take pictures of my birds occasionally simply because they’re available as (more or less willing) models. This usually gives me a bit of a challenge because they tend to move around a lot, and they can change from oh-so-cute little fluff balls into the meanest, angriest birds you’re likely to see this side of that popular game. Small they may be, but let me tell you, they know exactly where to bite your hand. And forget that nonsense about not biting the hand that feeds you — these birds have never heard that expression and wouldn’t understand it, either.

This is the original photo taken with the Retro Camera phone app, using the Xolaroid camera.

Okay, so on to photography. I used my Droid smartphone and Retro Camera to take the picture of Zim, and then I used the PhotoFunia application to upload the image and paste Zim’s photo into this billboard. You can see some of the graininess in the black-and-white image compared to the smoothness of the color part of the image. The whole thing is a bit silly, but it might be useful for a creativity prompt. I’m thinking of experimenting with some more of my informal pictures to use them for the Thursday Writing Prompts posts. This one would be a bit of a head-scratcher for a story, but maybe that’s what creative folks need — a bit of a jolt to get pushed off from those mental icebergs.

We went to Yellowstone National Park the first week of September, so it was not prime tourist season. There were a few traffic jams during our time in the park. One was caused by a huge motor home that hadn’t quite made a U-turn and apparently got stuck trying to maneuver underneath a tree branch or something. Fortunately that didn’t last long, but looking at the bumper of the car ahead of me is not really what I’m after on vacation. At least there were pine trees out the side window to look at. Other traffic jams were caused by people trying to find places to pull over so they could take pictures of bears, bison, or elusive elk.

Bison grazing on the river bank.

We saw one bear that was very far away and only looked like a speck. Even a telephoto lens wouldn’t have been enough to make taking its picture really worthwhile. I think we saw one elk as it disappeared behind a grove of small trees. But the bison were nearly everywhere. The first afternoon we spotted a herd on the opposite bank of the river. Fortunately, there was a parking area here so we were able to get out of the car and walk down to the river. The area was big enough that people weren’t elbow-to-elbow trying to take pictures. The area was nicely wooded but wasn’t so dense that it made for a difficult trek.

They warn you to stay away from the bison. These are big, heavy animals and they’ve been known to charge cars. In short, don’t piss them off by poking your camera or finger into their faces. Since they were on the other side of the river it was probably not too dangerous to walk around a little, and I’m sure we could have sprinted for the car if any of them had decided to cross the water. But they were pretty interested in grazing and relaxing and didn’t seem to pay attention to the puny humans scattered on the opposite river bank.

Later, we were driving along the main road and there were a few bison off to the right-hand side of the road and a few more up ahead of us. We were watching the ones ahead, because the cars in front of us were slowing down and traffic was becoming a bit intense. I saw a movement out of the corner of my eye and found a bison standing about ten feet away from our car. He wasn’t moving very fast, and I was able to roll the window down just enough that I didn’t have to take his picture through the glass. I managed to get a couple of good shots of him as he strolled by the car.