I’ll be at Shore Leave 41 this weekend, selling and autographing books, and enjoying time at the show with my coauthors and other event attendees. For those of you local to Maryland, the show is held at the Delta Hotels in Hunt Valley, Maryland, just outside of Baltimore. Shore Leave is a long-running convention and has a pretty good attendance, plus a whole line-up of guests from various science fiction shows.

For show updates, you can follow @corrugatedsky or follow me @ksgarvin on Twitter. I hope to have some super show photos to show next week, but don’t wait — get on out to the show if you can. Come on by the table and check out the books and say hi.

Sculpture of a sea horse and eagle by Edmond R. Amateis, located outside the Baltimore War Memorial Building. Photo by Karen S. Garvin.

This week’s Thursday Writing Prompt is about poetry and the memories of war. This year, 2014, marks the hundredth anniversary of the beginning of the First World War, also known as the Great War. Trench warfare and the use of gas are the historical aspects of WWI that you’re most likely to see featured on television shows and in movies, but some great poetry was written during the confrontation. Some of the authors were Siegfried Sassoon, Wilfred Owen, Alfred Joyce Kilmer, Vera Brittain, John McCrae, Rudyard Kipling, Katharine Tynan, and Alan Seeger.

Your task this week is to combine history and poetry. Go to the First World War Poetry Digital Archive or First World War: Prose and Poetry and spend some time viewing the collections. Pick two authors and read one poem from each writer. To get a much better feel for their work, view any images of the actual manuscripts. Your task is to notice the language used in the poems and how the authors told their story. There’s no writing involved this week unless you’re moved by what you read and want to try your own hand at war poems. This isn’t a post about politics, but about the wider scope of war and human experience. If you do make an attempt to write something, try to see beyond the political squabbling and into the greater truths of human nature.

The photo accompanying this post building is the Baltimore War Memorial Building, which was completed in 1925. It serves as a memorial to Maryland veterans of all wars and has an interesting history of its own.

This lion gargoyle sits atop a window in Baltimore. The picture was taken with a Nikon Coolpix S210 and converted to black-and-white using Topaz filters.

This week’s Thursday Writing Prompt asks you to write a descriptive paragraph or two that focus on setting. I think if you aim for 350 words that will give you enough room to do some development, but it isn’t so short that you get lazy and write lame sentences such as “the building was made from stone.” Tell your reader what kind of stone by describing its physical properties, like size, shape, and color. What you want to do is make your description so vivid that the reader will see your setting and feel like it’s real.

Writing about things you see every day is actually pretty hard. What I’ve found is that I tend to go past things without really looking at them, because I’m usually on the way to work and busy thinking about something other than the buildings that I’m walking or driving past. And I’ve got to say that people who spend a lot of time on their cell phones are almost never aware of their surroundings. Not a rant; just an observation. But the larger point is that people get distracted with daily life and don’t notice the details. I only just noticed last week that the building I park my car in has a second-story balcony on the front, and I’ve been walking into the lobby of that building for, oh, almost a year.

Being a tourist or visiting someplace nearby where you don’t often go is a better way to start writing description because you’re already primed to be looking around you for directions. The novelty of non-routine is enough sometimes to break through the fog of boredom and chores that accompanies daily life. If you can, go someplace that’s new to you and write about something. It doesn’t have to be a road trip. You can go to a coffee shop that you’ve never been to and sit and write about the building across the street or the trees planted outside. If you’re stuck, just write notes.

Here are some things to consider about description. When you’re writing about buildings, look at their shape. Yes, most buildings look like squares or rectangles when you look at them from the side, but don’t assume that’s a given. Tell your reader the general shape, then add details like how many windows or whether the windows are large or small, single panes or multiple panes. Are there shutters? Does the building have venetian blinds or shades? Sketch them with words. Don’t forget to include architectural elements, like the lion’s head in the photo. Modern buildings may lack gargoyles, but they still have decoration. If you are writing about a natural setting don’t just write “There are six trees on the far side of the stream.” Are they pine trees? I love pine trees. Is one of them dead? Is the stream moving quickly or jammed up with a beaver dam? What shape does the stream take across the landscape?

One thing I’ve been doing is carrying my small camera with me and taking pictures of ordinary stuff, like street scenes, my desk at home, and all sorts of non-photogenic things you can think of. It’s a bit strange, but when you look at a picture you tend to notice things that you ignore otherwise. And I’ve found that converting some of my images to black-and-white gives me yet another perspective. Alternatively, sketching a scene (no matter your art skills) can be helpful to draw your attention to things like shapes and lighting. I think it’s good fodder for your writing practice to add a little art in your life. 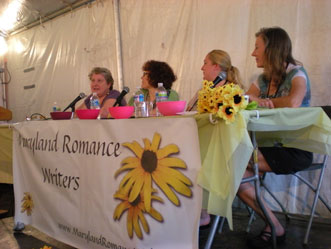 One of the many romance-related panel discussions held at in the Maryland Romance Writers pavilion at the book festival. Although most of the audience members were women, the "Steampunk: Gear Up for Adventure!" panel definitely brought men into the tent.

The Maryland Romance Writers' pavilion. I converted this image to black and white and used vignetting to draw attention to the signage. 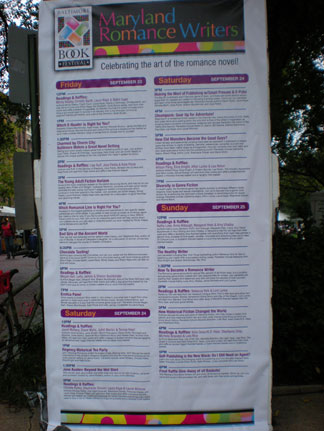 Signs like this showed the scheduled presentations for each group at the festival. There were a lot of them! I had to take a picture of the sign because my name is on it -- it's not quite "in lights," but close.

I enjoyed the Baltimore Book Festival and found it to be a pretty laid-back affair. Since I was going to be speaking on a panel, I expected to be pretty nervous, but the saving grace was that I wasn’t going to be sitting alone in front of the audience. The festival directors had an author hospitality area set up for us that included some food and drinks, as well as comfortable sofas. It was helpful to sit in there and relax for awhile before going out. I’ve done craft shows before and sitting in a tent all day can make you surprisingly tired. You never relax entirely, especially when the weather isn’t being cooperative — and it wasn’t cooperating on Friday because it rained all day.

The festival was held on Friday, Saturday, and Sunday. I only went on Saturday. There were presentations I would like to have listened to on Sunday, but I had too many commitments to drive back to Baltimore for a second day of the festival. On Friday I had to work.

The weather was generally good yesterday, although it poured with rain on Friday and made a few small rivers through some of the pavilions. The ground was still squishy on Saturday, but most of the festival was set up on pavement. The grassy areas were partly in the pavilions and those had  raised platforms for the speakers’ table and chairs.

The panel that I was on was called Steampunk: Gear Up for Adventure! We had six panel members and the moderator, Laurel Wanrow, who introduced the topic and gave the audience a brief description of what Steampunk is. The panel included Paul Ellis, Danielle Ackley-McPhail, me, Elektra Hammond, Lea Nolan, and Bill Gawne.

We talked a little bit about Steampunk technology, Victorian history and sensibilities, inventiveness, and world-building in Steampunk stories. All of us had some costumes on, even if it was just a fancy hat. The audience was reluctant to ask questions at first, but once one person broke the ice they all chimed in. Most seemed to really be interested in our clothing and asked us whether we wore any part of our Steampunk clothes in everyday life.

It’s funny that someone should ask me that (well, the panel) because I’m not a particularly outgoing person. I’ve spent too much of my life trying to be invisible so that I don’t draw too much attention to myself (living in bad neighborhoods does that to you). Plus, maybe it’s an age thing, because as an adult you feel a little silly dressing differently from other people. But I’m getting used to it. I advised the audience to start small, maybe with some jewelery, and add a hat or gloves. I told them that wearing boots was a good option, because if they didn’t want to show off the boots they could pull their pants legs over the boots and no one would really be the wiser. Of course, that won’t work with short skirts, but boots are so fashionable for women that really almost anything goes. Men can try pocket watches instead of jewelry, and hats definitely will work.

There are no upcoming events at this time due to the pandemic.